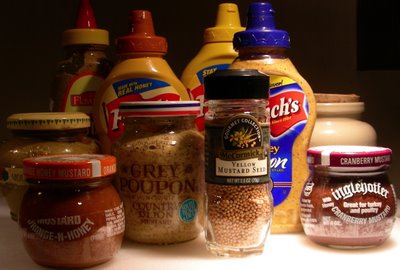 I learned in France that my Welsh-Cornish-Irish husband is really French.*

And he's got the Mustard Gene. We both do, but I come by it naturally.

Grainy mustard. Mustard with nuts, courtesy of a blogger friend who somehow divined our fetish.

Oh, and mustard jars. I once bought a huge brown crock, not shown above (there was no room), because I liked the jar and the cute French guy named Louis who was selling it (grist for another post). It took me two years to eat it all; there was, quite literally, enough mustard there to slather on three month's worth of bread for the entire French Foreign Legion.

There are very few savory dishes a dab of mustard does not enhance. An herby mustard sauce is great on vegetables. And you cannot make deviled eggs without mustard. It adds a "tangy zip" no mere salad dressing can compete with.

I knew my husband liked mustard long ago. He was always buying it, just like I was. It was when I saw him behind the wheel in France that I put two and two together and came up with French.

The other day Terry B. from Blue Kitchen asked about dressing. Below is one of my favorites, given to me by a chef-friend who father was also a chef and of my own father's generation.

The chef who makes it did not give me the exact quantities, so I’ve kind of had to figure them out on my own. You may have to experiment, too. I often add a bit more of this and a bit more of that. Or sometimes I just mix it up and pray it works. 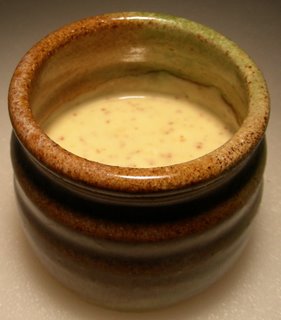 Toss it in the blender, whisk it or use a beater.

This recipe should make enough for at least two salads. I usually make it fresh because it is so easy.

It is best showcased on a simple green salad with tomatoes, black olives, red onion and cucumber.

Note If you like mustard, too, you may also like the the world-famous Mustard Museum is located in Mount Horeb, Wis.

UPDATE: In 2013, both my husband and I had our DNA tests via 23-and-Me and Ancestry.com, respectively. He may well be more French than I am.
Email Post
Labels: honey-mustard dressing mustard

Farmgirl Cyn said…
My refrigerator door is loaded with condiments of all kinds, along with a bottle or two of whatever Chardonnay was on sale that week! Marinades, tapenades, pestos (basil and a new one I made, garlic scapes), ketchup, severa varieties of mustards, anchovies, sundried tomatoes, roasted peppers, salsas, etc.
My favorite mustard would have to be Poupon...I use it on turkey sandwiches, in deviled eggs, and in Julia childs basic vinaigrette, which I always have on hand.
The little jars are so fun, and always hold the promise of something new, exotic, and exciting...just the ticket for someone like me, whose idea of a good time is perusing the shelves of some little Italian grocery store!
13 January, 2007 11:12

Anonymous said…
Must be a fairly common gene among foodies. One of my favorites is a Raspberry Wasabi. I probably would consider a kitchen without at least 10 mustards unloved.
13 January, 2007 11:21

Anonymous said…
Mustard is big in our household too. There are currently at least five or six in our fridge, from French's yellow to a delightful Moutarde aux herbes de Provence from Reims that was part of a foodie bundle Marion put together for me for Christmas.

I love stirring a mustard like this into a cream sauce at the very end, after the heat is off. The end result doesn't scream mustard, but just has a slightly more interesting, livelier flavor. Not tart or anything, just more complex.

All this talk reminds me I'm out of another favorite, a wasabi powder that I sometimes add about a tablespoon of, dissolved in a little milk, to mashed potatoes. Again, it doesn't add a mustardy flavor--just the tiniest bit of heat [miniscule] and a subtle but lively taste.
13 January, 2007 12:22

savvycityfarmer said…
Here we go agian...buying stuff because it looks so pretty...I should speak for myself eh?"Frenches" yellow , smear it all over a hot dog mustard NOT...BUT glomming the dijon into deviled eggs, potato salad, marinades and the like...now that's some good eatin'...
If you put orange juice, ginger, brown sugar, and some dijon in a zip lock bag and marinate chicken breasts....ooohhhlala
13 January, 2007 13:29

Anonymous said…
I spent a little extra time in the condiment aisle at the supermarket today spying on the mustards. It is really amazing to see how far a regular market has come in providing us, who like to cook, with the varities we have in all the aisles now. Julia Child, thank you! Mimi, I love the Mt Horeb Mustard Museum. Amazing the variety he has, almost overwhelming, isn't it?!
13 January, 2007 13:38

Anonymous said…
You have my favorite way of eating mustard right there on this post. That is the only kind of salad dressing I will eat!!! Thank you for the recipe, I plan to make it very soon.
13 January, 2007 13:53

Anonymous said…
My husband is a big Dijon mustard fan, me I prefer the lowly French's mustard! But your dressing recipe sounds very good and easy Mimi, I'll give it a try very soon.

Unknown said…
Yup, Cyn, you got it — those jars d0 hold the promise of something new and exotic, always. Mustard is something that manages to be both rustic and chi-chi, somehow.

Tanna, I have not seen that one here yet. But raspberry wasabi (would that be rasabi?) sounds like one I should try. Maybe it's part of a set of genes that food lovers get. Honestly, I know some people who do not have it.

Kalyn, that would be great. It's so simple and really, there's nothing terribly naughty in it. You can use low-fat mayo or salad dressing.

You knnow Terri, I found mustard very similar once — with herbes de Provence, oh what could be better? Wasabi powder — I'll look for that locally.

CF, you may have helped answer the "What do we eat tomorrow?" question — that sounds good.

Lu, one of the reasons we left our little burg today was to shop at a larger supermarket that has an attached wine store. I found almost everything I was looking for there, and was pretty much thinking the same thing. And by coincidence, I bought a Julie Chil biography today — to augment "My Life in France," which I read last year. Love her.

F2B, you may have to tweak the ingredients a little. What you see above is pretty close to the original, though.

LOL, Lydia, I thought of your pantry today as I bought peach-infused balsamic vinegar and citrus-champagne vinegar.

Anonymous said…
I'm a mustard fan and that recipe looks very good, particularly with it being summer and salad time downunder.

Anonymous said…
This looks like such a great recipe. Thanks for sharing it.

Unknown said…
Well, there's a story there, too. Perhaps in another post.

Anonymous said…
I guess that's the true French in me....I also love mustard. I like the spicy, Dijon-type, mustards.
I was astounded there's actually a mustard museum!
And yes, I'd say your hubby definitely has a hidden French gene there.
14 January, 2007 10:37

Unknown said…
It was the driving that gave him away. But the mustard was the first clue.

The varity of mustards on the market continues to astound me, Terri. I think a visit to the museum would be a must for any foodie.
14 January, 2007 10:39

Anonymous said…
I have the mustard gene, too. I suppose a dijon mustard is my favorite, but I also like Colman's English mustard-which can blow the top of your head off, and a creole mustard, with the little seeds in it..for remoulade and other goodies.I have often bought a new mustard because of liking a ceramic crock.
Here is a favorite simple mustard recipe: Steam a whole cauliflower. With a pastry brush, cover the entire, still warm cauliflower with mustard. Pat freshly , finely grated cheese all over (your choice: greyere, jarlsberg, cheddar- all good)- it will stick to the mustard easily. Sprinkle with papreika. Run under broiler, until cheese is melted and gold-brown. Serve in wedges.
I love cauliflower to death, myself.
14 January, 2007 12:13

Unknown said…
Ah, Lindy, you are one of the many psychics who visit here. I used this on a caulflower salad the other night and was planing a cauliflower post in the near future.

Jann said…
There are a few food items I would walk two miles for in blizzard conditions with snow piled three feet high-alas, a great mustard. I think you know what mine is....did a blog a while back on it-Looks like there are many mustard lovers in the blog world-yehhh!
14 January, 2007 19:25

Unknown said…
Jann, you are a true mustard lover.

Katie said…
When you are next in Paris you must go to the Maille shop and get a proper mustard pot! Complete with tiny little mustard spoon.
Or take the train to Dijon...
I love mustard of all types, as well.
Did you know the the 'Dijon' mustard here is much, much hotter than what you get in the States?
Bet you can't get Black Truffle Mustard....
15 January, 2007 06:49

Anonymous said…
Isn't the selection of mustard at Woodman's fun to just look at? Sadly, they stopped carrying my favorite Luzianne Creole Mustard. So I'm going to need to find a source for that. Do you know any good internet or mail-order sources for mustard?
15 January, 2007 07:26

Unknown said…
No, Katie, I cannot buy Black Truffle Mustard, rats! Maille is on my list of places to shop, along with so many others. I want that little mustard spoon — what a good idea. I'll just eat it from the pot.

Kalyn Denny said…
Just stopping back to let you know I'm featuring your recipe and photo for my South Beach Friendly recipes of the week, with a photo credit for you and a link to your recipe of course. Truly a lovely recipe.
20 January, 2007 10:51

I consider this a high compliment, as there is nothing but excellense at and in Kalyn's Kitchen! 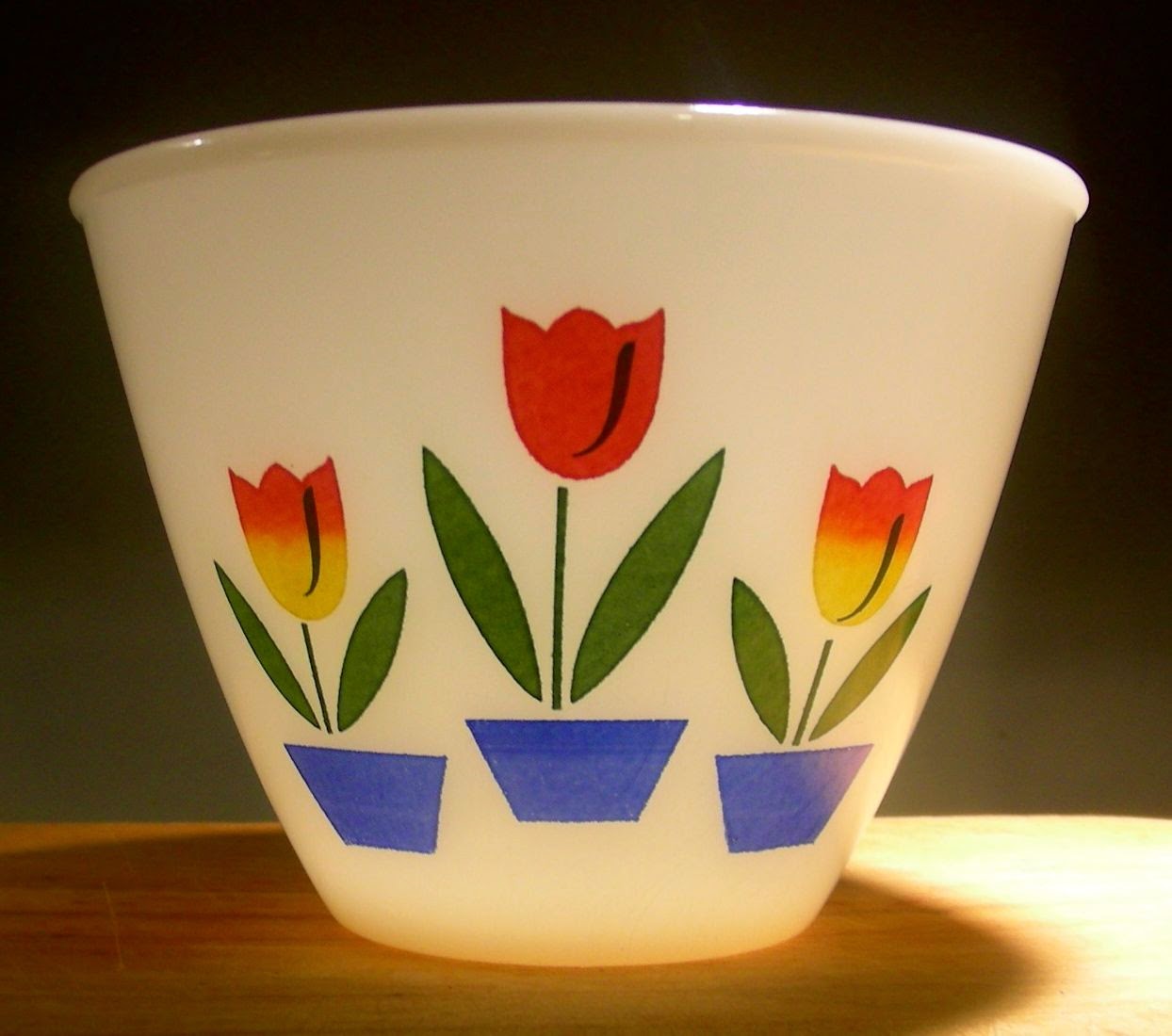