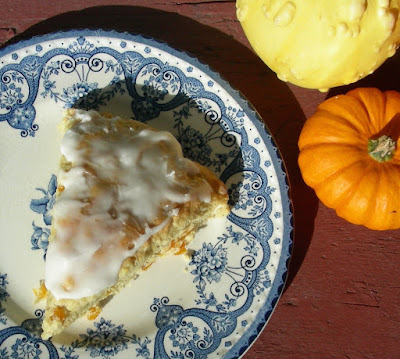 We harvested dozens of green tomatoes this week, but still have a few pole beans on the vine. There's one tiny eggplant left.

No hard freeze yet and its already the middle of October. The leaves are turning slowly this year and all signs point to a long and lingering fall.

The farm markets are winding down, in stark contrast to a decade ago when they peaked with gleaming pumpkins and squashes in brilliant hues at the end of October. There's not much of a pumpkin harvest this year, relatively speaking.

Our earlier tomatoes were mushy and tasteless, thanks to heavy rains in June. Later season tomatoes, especially the cherry variety had more zip. We made a huge bowl of salsa last week, and split it so I could add cilantro and my husband could go heavy-handed on the hotness.

I bought eggs, pumpkin, onions, carrots and freshly-ground coffee at the farm market this week and splurged on an apricot-orange scone with the faintest hint of almond. So good.