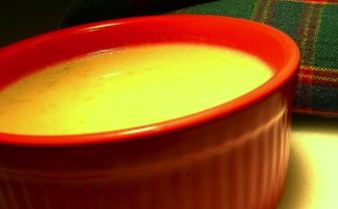 It's that time of year when we wake to the sounds of gunfire from the woods across the river or the wetland on the edge of town. After 18 years, these sounds are no longer unnerving to me, but part of the natural sounds of the season.

Meanwhile, the juncos are back from their summer retreat, and the other morning I saw a nuthatch darting up and down one of the cedar trees. A red-headed woodpecker was drilling away at the Indian corn that hangs on the old carriage house.

I love these seasonal markings. Another is the availability of Brussels sprouts at local markets (although I dawdled at home one morning and missed the chance to buy some very fresh ones).

I have two favorite Brussels sprouts recipes that are worth repeating. Both are among the most popular recipes on this blog.

Add one cup of broth, bring to a boil and cover, lowering heat.

Add onions. Allow to simmer for 10-15 minutes until broth is reduced. Carefully transfer to stockpot, adding potatoes and remainder of broth. Cook under low heat for another 10 minutes, adding nutmeg and salt and pepper (taste frequently; I used about 8 spoons).

Turn off heat and allow to cool 15 minutes. Then transfer soup to food process or blender. Puree. (I pureed one half, set it aside and then pureed the other half). Return to stock pot and add cream, re-heating under low heat.

Serve with grated cheese and croutons. It's a meal in itself! Pair it with Croque Monsieur.

Lydia (The Perfect Pantry) said…
I think I have just that number of sprouts sitting in my refrigerator, waiting for a purpose. Thanks for the recipe.
11 October, 2012 08:36

Unknown said…
Lydia, I am amazed at how many people love Brussels sprouts. My mother never made them when I was growing up so they were a taste acquired much later in life. I'm wondering if they were hard to find here in the 50-60s?
11 October, 2012 08:43

Chef Dad said…
Count this house as brussels sprouts lovers. In Texas, we still have a month or so before they're fresh. But, it's one of those "Your kids eat what?" moments among family and friends.
11 October, 2012 09:16

Unknown said…
Good for you, Chef Dad! Parents often provide piano and riding lessons, golf and soccer lessons and take their children on trips, but fail to expose them to a varied diet, which certainly adds to their personal development on many levels, just like lessons and travel.