France: On a Train Going South 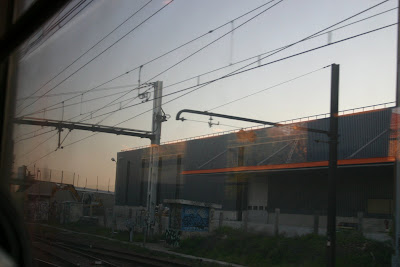 I knew I was French before I knew what it meant to be American, thanks to my grandmothers who spoke French at home. But my love affair with France began in the pages of books.

It was a gift from my father, Kay Thompson’s “Elouise in Paris,” that ignited my early passion for Paris.

(In fact, I rather patterned my behavior after Elouise’s own mischievous antics, something my father encouraged, even rigging a toy telephone hookup between my tiny bedroom and the kitchen so I could call “room service.”)

My attraction for points south of Paris began long before Peter Mayle even considered moving to Provence.

It started with a box of used paperback books. I was 14.

“Here, you’ll like this one,” my father said, as he handed me a copy of Dorothy McArdle’s suspense-cum-romance novel, “The Dark Enchantment,” set in a perched village in the Alpes-Maritimes.

He was right. I was hooked.

Words like “Languedoc,” “Provence,” and “the Midi” soon began to conjure up images of sun-warmed aubergines and deep rich wine and mysterious olive groves.

So as the train inched out of Gare d’Austerlitz for the southwest of France, there arose inside of me a sort of breathless anticipation.

Paris is lovely and layered and enchanting. But it is the south that resonates with me in a deeper, more atavistic way.

As the train made its way through banlieu and brickyard, my excitement grew. Somewhere south of Chateauroux, I sense a subtle change, a shifting of the light to be sure, but an insouciance, a spirit I could not define.

But I knew we were heading south on a train that cut a swath through the green heart of France. I could feel the south, sense its allure, smell its perfume.

At Limoges, I noticed the passengers who boarded looked like they could be my relatives, not surprising since the branch of family I most resemble originates in not-so-distant Poitiers.

Somewhere — perhaps Limoges — we saw old cars from the legendary Le Mistral rusting away on a sidetrack.

The Lonely Planet called Cahors “a sunny southern backwater.” It was sunny and southern, certainly, but no backwater in my book.

It could have been Aix. Plane trees and bougainvilla. There was a festive holiday feeling, one that continued as Gérard drove us up into the hills. Vineyard after vineyard. Pink and tan houses with dogs in the yard. Lilacs and juniper and a hint of sea breeze in the air, in this place midway between the Atlantic and the Mediterranean.

At the house, we unpacked and settled in chaises at the pool, surrounded by olive trees in deep pots. We drank the sunshine and the rich dark wine of Cahors. 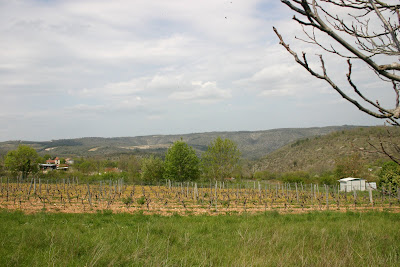 Anonymous said…
Home for sure !
Your body may dwell in America, but your heart and soul dwell in France. I loved the pictures you painted on your journey south in the train.

MyKitchenInHalfCups said…
Oh, my...Yes, Paris is lovely but south of it is another place where I feel out of time.
But then I feel something like it north and east and west of Paris. Such a country.
06 March, 2007 03:31

Unknown said…
Yes, Fi, small plates of raisins or cookies or nuts for me and for my dolls and teddy bears. I was thrilled.

Lydia (The Perfect Pantry) said…
Mimi, we're all getting in the mood for France through your lovely posts. I'm so excited that your trip is coming soon.
06 March, 2007 06:37

Unknown said…
Lydia, I am, too. So many bloggers seem to be going in March — I'm getting itchy.

Jann said…
That was a wonderful post, Mimi-I know you are anxious to go to France! It won't be long now-all the places you described are so beautiful, I do hope you get to visit them again soon!
06 March, 2007 07:22

Anonymous said…
Cahors was my first real trip out of Paris. It made me realize that my Francophilia wasn't simply a love of Paris, but there was much more of the country to love.

Unknown said…
Ten weeks now, Jann. I wish I had more than three weeks of vacation a year — oh, the places I'd go!

CF, it's been fun traveling with you! Thank you!

Anonymous said…
What a lovely post, I too can't wait to go again to France. Just a quick trip across the channel for me at the end of the month in Honfleur for 3 days. I'm afraid to admit I have never been to Paris, my husband claims he hates cities and stupidly says find someone else to go with, which I might just do one day. Did you visit Cahors Mimi? We have planned a holiday in July in the Lot valley, we haven't been so far south before. I love your blog it transported me for a few minutes!
Anne
06 March, 2007 11:08

Unknown said…
Thanks, Anne. We stayed at the home of a friend in the hills above Cahors. It was lovely, every moment! It was sunny and warm and breezy — and it was April. It was perfect in every way. We followed it with a long weekend in Paris, our longest Paris stay to date, which will soon change.

And Honfleur — I would love to go there.

Farmgirl Cyn said…
Mimi, If you get a chance, could you e-mail the roast chicken recipe from the previous post? I just bought a 5 1/2# roaster today, and thought I would prepare it Wed. or Thurs. I am going to do a library search for Susan loomis' cookbooks.
Your father sounds like quite the man. How cool is that, to have him referring books to you at such a young age!
06 March, 2007 14:26

Christine said…
Mimi, You make my heart ache for Cahors! I swear I passed by the scene in your photo. That very field - I swear! I can't wait for the vicarious thrill of knowing you are in France again. Soon!
06 March, 2007 20:15

Unknown said…
Christine, perhaps you did pass by — it is on the way to Douelle, off Route des Trespours (I think that's the name).

Unknown said…
You are part of the story, Kristen! There is no story without readers.

You will all be with me on my next trip, thanks to the wonders of technology, Apple Computers and the WIFI at the American Library.

Anonymous said…
Another lovely, evocative post, Mimi. My time outside Paris has all been northerly. My brother and I rented a car in England [he was living there at the time], drove to Dover and took the very first ferry of the day to Calais, arriving a little after six in the morning. We stopped at a little bakery where I called on rusty high school French to get us something to eat, then headed for Paris.

I was teaching art in a small college in St. Louis at the time, so going and coming we hit cathedral towns--Amiens, Rouen and Chartres--to see cathedrals I'd lectured about, but had only seen in books and slides. Amazing!

Would love to travel to the south of France someday. Can't wait to travel there vicariously through your posts. How many weeks now 'til you go?
07 March, 2007 00:00

Unknown said…
Dover to Calais! How evocative those words are!

Ten weeks until Paris. We won't get to any other part of France on that trip. We will be there for two weeks, but unless we take a short day trip, we plan to spend our time exploring small neighborhoods off the beaten path and going to museums.

The plan is to return to the southwest of France in 2008 and then Provence, but not until later that year or the next.

I believe if all Americans had more vacation time or the means to travel frequently — slow travel, not dashing from monument to monument — we might have fewer problems with the ignorance and prejudice that has been so prevalent in this country in recent years. (Well, it's always been there but the past six years or so it has seemed more intense.)
07 March, 2007 05:10

Anonymous said…
Two weeks in Paris? I must tell you, Mimi, to this city boy, that sounds like heaven. When Marion and I went to Paris, we were there for eight days. We had plans to go to Versailles [she's seen it--I have not], but we couldn't make ourselves leaave the city for even part of a day.
07 March, 2007 11:22