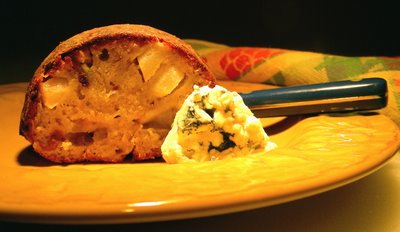 I survey my refrigerator every day or so to see what’s left over, forgotten or likely to go to waste if I don’t use it soon.

Some would say it’s the old French frugality cropping up.

Grandma Annie did the same thing. I thought of her as I cobbled together a quick lunch today. And for some reason, I thought of Barb, perhaps because I sensed hers was a frugal existence.

It’s been years since I thought of her, the large, plain woman who lived two short blocks from Grandma Annie. I remember her as a quiet woman, either sad or wise, or perhaps both. She wore sensible dresses and sturdy shoes and was one of those people you see walking when others drive.

She was younger than my grandmother by 15 or 20 years, I think, but Annie seemed to watch out for her. If she baked cupcakes or cookies, she’d whip off her apron, grab her coat and say, “I’ll just take some down to Barb.” If Annie’s garden yielded more tomatoes than usual, she'd always give some to Barb.

Barb would do the same, less frequently. I do not recall Annie entering Barb’s house or Barb lingering in Annie’s sunny living room, but they kept in touch.

As I grew older, I understood that Barb’s handsome husband was a bit of a ne’er-do-well. He had a good job, I am told, but what he did with his money, I do not know. There were whispers, of course, there are always whispers; Annie was too polite to say. I knew better than to ask.

In my head I drew certain conclusions about Barb that I never voiced around my elders. I simply filed it all away.

Barb fascinated me. I knew she worked in the office of a big department store and she walked to work every morning and walked home every night surefooted in her big sturdy shoes. Not many of her generation worked outside the home, but Barb did so with quiet dignity that I admired even as a child.

She did what she had to do, and if she was troubled by it, she never said. She simply did.

I do not think my grandmother pitied her. Nor do I think Barb sought pity. But it was clear Annie respected Barb and thought of her when she had extras to give away.

Today, looking at the contents of my refrigerator, I was baffled until I stumbled upon on a site called Let’s Cook French, which featured the recipe from which this cake was adapted. It was an interesting experiment.

The original recipe calls for the batter to be poured into a buttered and floured cake mold. I used a bundt pan.

Note: This is a most unusual cake. More savory than sweet, it strikes me as a brunch dish that could be served with a fruit salad or with a lettuce salad that includes fruit. It has a rustic, Old World taste, not unpleasant.
Email Post
Labels: blue cheese blue-cheese-and-pear cake cake cheese pears

Unknown said…
LOL. I write for a living, CF, it comes out quickly!

MyKitchenInHalfCups said…
I love the sound of these ingredients; it would seem to be a glorious melody of flavors.
Truffles? You are totally ahead of me.
25 January, 2007 23:08

Anonymous said…
Thank you for the Barb story that accompanied this recipe, a woman of dignity - definitely. Its interesting how different kitchen activities, recipes, tastes, smells etc. bring back memories of people, other times and places.

My grandfather made marmalade every year from the ripe grapefruit in his garden. I can NEVER look at a jar of marmalade without him coming to mind.
26 January, 2007 02:07

Anonymous said…
I love to eat blue cheese and pears together, but never thought about combining them in a recipe. This sounds so incredible, that I am going to the local cheese shop later today to buy the cheeses. And I have three almost perfectly ripe pairs waiting to be eaten in the fruit basket. Hmmm, it's funny because I had yet to decide what to do with them and this sounds much better (and easier!) than a pear tart.
26 January, 2007 03:56

Unknown said…
Tanna, I interviewed a chef yeterday for a story I am writing today — I was inspired and besides, a coworker is leaving for new horizons — I thought I'd bring her something sweet.

Fioan, I've never had grapefruit marmalade, but if you have a recipe, i am willing to try!

Three ripe pairs are exactly what I had, too, Elaine, and leftover blue cheese that was begging to be used. It's a rather interesting cake — I wasn't sure what to expect. And yes, it's easier than a tart.

Farmgirl Cyn said…
OK...this combines 2 of my favorite foods! Bleu cheese in any form, and pears! I am not a huge fruit lover...muskmelon tops the list, with peaches and pears close behind. I think I could easily enjoy that combo! Sure wish we lived closer...like within a few blocks! (you could just send some extras over like Annie and Barb did!!)
26 January, 2007 09:59

Anonymous said…
Barb sounded like a very special person and it's easy to see that Annie noticed that. I enjoyed reading this.
And the cake recipe sounds great.
27 January, 2007 18:14

Linda said…
wow this looks so interesting! i absolutely have to try it solely because i can't even imagine what it must taste like. i mean i eat pears and blue cheese often enough but its usually after/before dinner, paired with my favorite glass of wine. what a perfect dessert for a dinner BASED on wine (and i hold these at my place often) -- i can't thank you enough!
31 January, 2007 07:06

Unknown said…
Linda, this was a very interesting flavor pairing — I sould regrigerate it overnight, though — my only caveat.