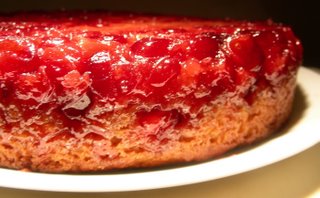 I’ve made it a New Year’s resolution to explore at least one new blog a week. I fell behind on this during the fall, and only recently began to catch up.
It is such fun to explore different approaches, different eating habits and different philosophies. Different is the operative word here. I have never understood why there is so little tolerance for differences in this world.
Back to the topic at hand: Exploring other blogs. One I stumbled upon a few weeks ago was Kitchenography, out of Baltimore, a city where my husband once lived (and still loves). The day I visited, the site's owner, Julie, who also loves Baltimore, had made a cranberry upside-down cake, which she found in a book called "The Best American Recipes of 2001-2002."
I couldn't get that cake out of my head, the jewel tones of the cranberries, the hint of tart and sweet and rich layers of flavor. I wanted to make it for Christmas. I got too busy. Perhaps for our anniversary? Forget it, still occupied. So finally, I made it for our New Year's Eve feed.
The verdict: It has an old-fashioned taste. It's something you might find in a magazine like "Early American Life." It paired well with the bubbly. And it's perfect for the holidays: The cake is rich and moist, the cranberries are tart and the cinnamon imparts a mysterious, spicy taste. I should mention that I used fructose, brown sugar Splenda and low-fat sour cream.
So thank you, Julie, for introducing me to this delight. I look forward to reading more on Kitchenography in 2007.
Email Post
Labels: cranberry upside down cake food blogging

Lydia (The Perfect Pantry) said…
Happy new year, Mimi! What a nice resolution, to explore new blogs every week. Kitchenography is one of my favorites, too.
01 January, 2007 04:12

Unknown said…
I've said it before, Lydia, there is so much talent out there. So many new ideas and new food combinations.

Anonymous said…
Drat, I'm wanting to make this one or the one in Greenspan's book but can't get any more fresh cranberries here! It is a fabulously beautiful cake. And Kitchenography is excellent.
01 January, 2007 12:06

Thank you for the link.

I only just discovered your blog very recently and I love the way your posts are about so much more than food. Wonderful writing!

Unknown said…
Thanks for visiting, Julie.

Anonymous said…
hi mimi,
this looks good. i have some leftover cranberries in the freezer and will use them. i think i can find cake flour in the supermarket here. do u know what they call it here? i know flour is ble.
05 January, 2007 08:54