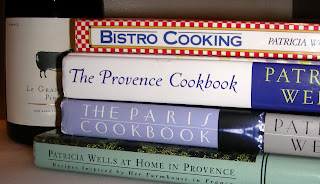 When I was a student at UW-Madison in the 1980s, everyone was talking about alumna Jane Brody, the New York Times writer who was making a name for herself writing cookbooks about healthy food.

I very much wanted to write about food, but was not sure how to start. I wrote my first “how-to” feature about baking bread, which at that time was one of the few things I knew how to do.

Somewhere along the line, I heard someone say, “Yes, Jane’s doing very well but there’s another grad over in Paris who is doing some interesting things with French cooking.”

That was Patricia Wells.

It took me a while to put two and two together — to connect the name Patricia Wells with the J-school alumna I'd heard about — but I have followed her career and cheered her many successes. 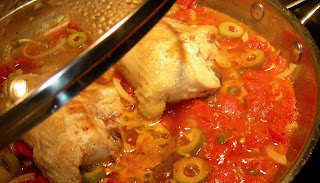 And I’ve made my share of Patricia’s recipes. I have never known one to fail.

Sunday we had Patricia’s Fricassee of Chicken with White Wine, Capers and Olives. It's from The Provence Cookbook, published in 2004. I did not have a whole chicken and did not feel like leaving the house to get one, so I used two chicken breasts and halved the recipe, which calls for tomatoes, onions, green olives and capers.

Here is the recipe (scroll down). 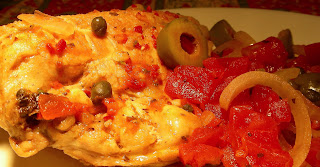 It's easy: Season the chicken and brown, then remove from the pan and soften the onions. You then add everything else and simmer over low heat for an hour. I served this with penne pasta flavored with butter, truffle breakings and a dash of grated Gruyere.

"Ah, the tastes!" my husband exclaimed after the first bite. "And the chicken is so tender."

Lydia (The Perfect Pantry) said…
I agree about her cookbooks; they are well edited and the recipes always work. I love the combination of olives and capers with chicken (remember Silver Palate's Chicken Marbella?).
29 January, 2007 05:00

Unknown said…
Loulou, you could just show up at her doorstep and beg to watch her cook! Seriously, her cooking classes sell our years in advance.

What I have found, Lydia, is that her chicken recipes have depth. The food tastes like chicken, but it has a layered flavor, like a good wine.
29 January, 2007 06:28

Farmgirl Cyn said…
I have her both Paris and Bistro cookbooks...What I love about Patricia's books is her detailed explanations and descriptions of the dishes, and her wine suggestions! This chicken dish is so simple, yet could easily be "company" fare.
29 January, 2007 11:07

Unknown said…
It was pretty darned good, Kristen. I would serve it with rice from the Camargue, I think, instead of pasta. My husband prefers pasta — you know how that goes!
29 January, 2007 14:50

Anonymous said…
I have The Paris Cookbook, a purchase inspired mainly by the wonderful picture on the cover. I love reading about Patricia Wells' life in Paris although I've found the recipes less inspiring and have only cooked one thing from it -- another chicken fricasee type of thing which despite the two (two! what was I thinking of?) cups of heavy cream was not all that great. I have a feeling that this is not her best book though.

This fricasee looks delicious. Capers and olives are favorites of mine.
29 January, 2007 19:15

Unknown said…
I have not made anything from the Paris cookbook yet, Julie. The Provence Cookbook uses a lot of the ingredients I usually have around.

I guess we sort of follow The Mediterranean Diet here, so those are the ingredients we tend to have.

I also thought some of the Paris recipes were a little high-fat (yes, two cups of cream!) so maybe that's why I've never used it.

My husband reads my blog over the noon hour and he said he became hungry all over again looking at the chicken photos.

Anonymous said…
Wells is indeed a legend...especially in Paris.
Are you familiar with the French cook, Lydie Marshall?
We'd rented an apt. from her and Wayne in the 15th many years ago and then rented another one from a friend of theirs in the 13th.
I had the pleasure of meeting Lydie, and she was kind enough to give me an autographed copy of her book, "A Passion for Potatoes." She did own a cooking school in Manhattan, not sure if she still does.
You can go to Amazon, if you're interested, as I recently saw she had a few more cookbooks out. A really nice lady. I should do a blog about her and the cookbook.
30 January, 2007 18:18

Unknown said…
I've heard of her, Terri, but I have to confess I am not terribly familiar with her work. I will take your advice, though, and look into it. Thanks!

Anonymous said…
You've got me headed for the library, Mimi. I must try this dish.

There's something so intriguing about the regional quality of French cooking. I mean, we expect it in America because the country is so darned big. But with France, there's the influence of being butted up against other countries with equally big personalities cuisinewise that flavors various parts of the country.
30 January, 2007 22:50

Unknown said…
I will sen you the recipe, Terry B.

Yes, that is what I love about France — that connection to other countries. True fusion in the deepest sense of the world. Not just something made up from two countries on opposite ends of the globe.
31 January, 2007 08:59